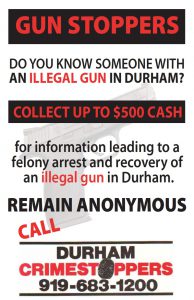 in 2015, Durham CrimeStoppers, in partnership with Project Safe Neighborhoods (PSN), launched a GunStoppers Initiative to reduce gun crimes. Traditionally violent crimes involve the use of illegal firearms. The GunStoppers Initiative focuses on soliciting information about illegal firearms in the community such as those possessed by felons, and those used in crimes. CrimeStoppers will pay up to $500 cash for information leading to a felony arrest and recovery of an illegal gun in Durham.

Durham CrimeStoppers is an anonymous tip line that allows citizens to report crime, and potentially collect rewards in felony cases. Citizens with information about people in possession of illegal guns should contact Durham CrimeStoppers at 919-683-1200. Callers never have to give their name.